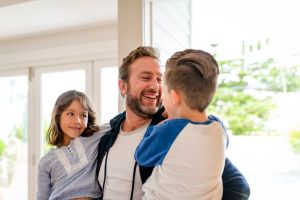 During a divorce, child custody disputes can be particularly tense. One parent may feel that they would provide a better and more stable home for their child or children than their former spouse. When these kinds of disagreements arise, it’s important to have an experienced child custody and divorce law attorney on your side. Fathers may face some challenges if they are seeking sole custody or fighting for joint custody.

The End of the Tender Years Doctrine

During the 19th century, family law and child custody matters were often guided by the tender years doctrine. This essentially awarded maternal custody of children until the child reached 16. The assumption behind this rule was that mothers would be better suited to raise a child than the father.

The Best Interests of a Child

Rather than considering the tender years doctrine, contemporary child custody matters are now driven by what is in the best interests of a child. This means that courts will consider the safety, health, and continued well-being of a child when awarding custody.

Factors That May Be Considered

When determining what is in the best interests of a child, courts might consider the following:

Demonstrating Why You Should Be Custodial Parent

In order to demonstrate your suitability for full custody or joint custody, it’s important that you show the court your dedication to good child-rearing. This means you should consider the following advice:

Fighting for Sole Custody of Your Child

Sometimes your spouse is simply not fit to raise your children, even with shared custody. You can also make your case for sole parental custody if you have the following:

Any kind of information you have that can demonstrate why you are better suited to raise your child than your spouse should be considered. Courts will note the dangers of the environment when trying to determine custody.

For more information about your legal rights regarding the well-being of your children, be sure to contact an experienced child custody lawyer. Attorney Karen S. Brown is here to help you. You can reach our law office by phone at (323) 766-6426.

Posting on Social Media About Family Law Cases Can Do Damage What Should a Prenuptial Agreement Include? Who Is Going to Pay the Kids' College Tuition? When Do You Need a Forensic Expert in a Divorce?