What Are My Options for Relocating with The Children?

You’ve been through a divorce and the parent who has custody of your children decides to relocate, whether for a better job opportunity or because of a new love interest. Can the custodial parent just up and move, or are there legal considerations? What rights do the non-custodial parent have to challenge the move? 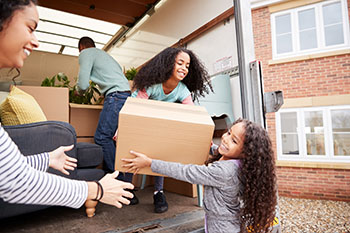 In any event, a move away by the custodial parent of more than 50 miles can disrupt the other parent’s joint custody or visitation rights, and the courts may have a say.

If you’re a divorced parent opting to relocate with your children, or on the other side, a non-custodial parent facing the relocation of your children, you will need to consult with a family law attorney to make sure everyone’s rights are respected.

If you’re in Los Angeles, or in the counties surrounding the city, including Orange, Ventura, San Bernardino, Riverside, and San Diego, contact the Law Office of Karen S. Brown. Karen S. Brown is a Certified Legal Specialist in Family Law, who will counsel you on your options and strive with you to achieve the best possible outcome for you and your children.

Relocating With Your Children

For parents who have never been married or as a result of divorce, a parenting plan will be put in place or approved by the courts. Generally, the parenting plan will decide who has physical custody and who has legal custody to make decisions for the child – where to go to school and who their doctors are, for example.

To complicate matters, there are different types of custody that can be awarded: to one parent – sole custody – or to both parents – joint custody. Even if both parents share physical custody, one parent may be named the custodial parent, thus complicating matters further.

When it comes to the parent with physical custody deciding to relocate with the children, the courts cannot stop the physical move, but they can decide to award sole custody to the non-relocating parent if it is in the “best interests” of the children.

California law does require that the parent who wishes to relocate provide 45 days advance notice of any move that will last 30 days or more. This allows both parents time to work out a new custodial/visitation agreement that will factor in the relocation.

If one parent objects to the move and seeks reversal of custody, a hearing will be scheduled. The burden of proof lies solely with the objecting (non-moving) parent to show that the move will be detrimental to the child(ren) and that a change of custody would be in the child’s (or children’s) best interest.

Factors the court will consider include:

Though case results are mixed, the courts generally favor the custodial parent in allowing relocation, provided that the welfare and well-being of the child or children are not jeopardized in the process. California Family Code Section 7501 provides that “a parent entitled to custody of a child has a right to change the child’s residence, subject to the power of the court to restrain a removal that would prejudice the rights or welfare of the child.”

This being said, the general trigger point for questioning a relocation is 50 miles. If the relocation is for more than that distance, the courts may take a closer look at revisiting and revising the parenting terms.

Family Law Experience You Can Trust

Relocating children can pose huge emotional problems for the non-custodial parent who may find being with the children infinitely more difficult. Sometimes, an arrangement can be made where the children split time between the parents – school year with one, summer with the other, for instance. Still, legal battles can ensue that make life difficult for both parents and their children.

If you’re on either end of a relocation – the parent relocating or the parent being left behind, so to speak – you have rights under the law that you can exercise. If you’re facing either of these situations, contact family law attorney Karen S. Brown. She will listen to your story, advise you of your options, and help you move toward the best possible outcome for you and your children.

Contact the Law Office of Karen S. Brown immediately if you’re in or around the Los Angeles County area, or in any of the surrounding counties. Karen S. Brown is a Certified Legal Specialist in Family Law and stands ready to help you resolve your situation, respecting the best interests of you and your children.