How Are Bank Accounts Treated in a Divorce? 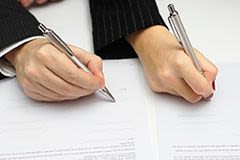 For many divorcing couples, separating bank accounts is difficult and a source of animosity. Seeking the assistance of an experienced divorce lawyer is essential for protecting your interests and ensuring the divorce process runs smoothly and fairly. Family law attorney Karen S. Brown is knowledgeable in all facets of the divorce process and can protect your interests in your divorce. For answers to your questions about divorce and bank accounts, contact our Los Angeles, CA offices to schedule a consultation.

When Are Bank Accounts Divided Equally?

Assets acquired during a marriage are typically viewed as community property. When it comes to bank accounts, this means that bank accounts established after marriage, whether joint or separate, belong to both spouses and will need to be equally divided in the event of a divorce.

Separate bank accounts that were established prior to a marriage may also be considered community property provided the account was used after marriage. This also means that nearly all funds, including regular paychecks, placed into the account after marriage would need to be divided.

Why Are Separate Accounts Not Treated as Separate?

To better understand why separate accounts are often not treated as separate in a marriage, it helps to understand the concept of commingling. In simplest terms, commingling is when assets are combined for common use.

Commingling can complicate matters with separate accounts and funds that were in an account prior to marriage. Adding a spouse's name to a previously separate account generally makes whatever funds were in the account, or added later, commingled and eligible for division in a divorce.

Even if only one spouse's name is on the account, commingling may still have occurred if both spouses used the account. In such circumstances, an argument could be made by either spouse's divorce attorney that funds should be divided or remain separate.

When Are Bank Accounts Kept Separate?

As previously explained, keeping separate bank accounts during a marriage does not guarantee funds will remain separate in the event of a divorce. However, it is possible to protect a separate account from being divided in divorce if the bank account truly remained separate throughout the duration of the marriage.

Additionally, signing a prenuptial agreement can establish what funds and other property will remain separate in the event of divorce. Some ways in which a separate account may be considered separate property in a divorce include:

If you are facing a divorce, you need an experienced divorce lawyer on your side. Divorce lawyer Karen S. Brown is here to help you in your time of need. Contact our offices today to schedule a consultation.