How Bonuses Are Factored Into Earning Capacity 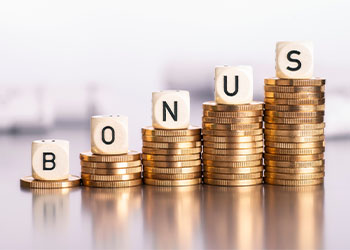 If you’re considering or already undertaking a divorce in California, many issues loom. The division of assets generally follows the community property laws of the Golden State, meaning everything starts with a 50/50 split but adjustments can be made to account for disparities in each spouse’s financial future. Then, there are also the issues of spousal support (alimony) and/or child support.

Spousal support can be either temporary or permanent, depending on each partner’s earning potential and earning gaps, so that one spouse can continue to enjoy – as much as possible –the life he or she experienced during the marriage. The award may be temporary until that spouse can establish a solid financial underpinning, or it may be permanent if the discrepancy is large enough and the future less certain.

California law does not require that every divorced person financially provides for an ex-spouse, but the law is quite straightforward when children are involved. The Superior Court of Orange County sums it up well when it comes to child support, declaring: “California state law says that every parent has a duty to financially support his or her child.“

If both parents have jobs that pay X amount of dollars every month and every year, then the calculation for child support can be fairly straightforward and stable. Each parent will pay a certain percentage of their income to support their child or children. The question looms, however, over what happens if one spouse receives bonuses either regularly or at year-end. Does the assigned court-ordered payment structure account for variable income?

If you’re eyeing divorce or are already in the process anywhere in Los Angeles County and wage considerations such as bonuses or commissions are involved, contact the family law attorney at the Law Office of Karen S. Brown.

Karen S. Brown has more than 45 years of experience in resolving issues of divorce when it comes to child or spousal support. She fully understands the law and all its nuances. She also proudly serves clients in Orange and San Bernardino counties, as well as throughout Southern California communities such as Encino, Studio City, Beverly Hills, Santa Monica, as well as the South Bay, Torrance, and Long Beach.

How Are Earnings for Support Calculated in California?

California courts will consider many factors in issuing a spousal support order. Primary will be the financial future and well-being of the spouses involved. If, for instance, one parent sacrificed his or her career and educational/training opportunities to care for the children or maintain the household, then that parent may be awarded temporary or permanent spousal support, at least until he or she can establish a secure financial future on their own.

Though spousal support is iffier than child support, if there are children or a child involved, then both parents are expected to provide the support necessary to provide the foundation for their offspring to enjoy as much as possible of the life they enjoyed prior to divorce. There is no “if” here. Both parents share responsibility, though one may be more capable of providing this support.

Often the spouse with sole custody, or primary custody, will be awarded child support payments from the other spouse based on that person’s total income. If the income varies because of bonuses, however, the law has a trigger mechanism to make sure bonuses are accounted for.

Smith/Ostler Awards: How Bonuses Are Factored In

In 1990, the California Court of Appeal addressed the issue of a husband who earned not only a regular income but also received a substantial income from bonuses. In Marriage of Ostler & Smith, the court devised a formula for dealing with bonuses, which has since been dubbed a Smith/Ostler Award.

Under this formula, the bonus-recipient spouse is obliged to pay 10 percent of each bonus to the child or children and an additional 15 percent to the spouse, for a total of 25 percent. Smith/Ostler awards still follow the principle of the court ruling, but the percentages can vary depending on the circumstances, including the financial positions of each spouse, the number of children if any, and other factors.

Experienced Representation You Can Rely On

Regardless of your position in the divorce – the one paying or the one receiving spousal or child support – the issue of bonuses can loom large. You don’t want to be shortchanged as a recipient, nor overly obligated as the supporting spouse. In either case, you need the guidance and representation of an experienced family law attorney who can work toward an equitable result.

If you’re in Los Angeles County or the larger Southern California area, contact the Law Office of Karen S. Brown with all your child/spousal support questions or issues. Karen S. Brown will offer her compassionate guidance to help you resolve everything and move forward with lasting peace of mind.

Family Law FAQs How Bonuses Are Factored Into Earning Capacity Posting on Social Media About Family Law Cases Can Do Damage What Should a Prenuptial Agreement Include?